FALCO Zrt. continues to build on its traditional foundations during innovation

As a significant participant in the international wood-based panel industry, the goal of the company with a long history in Szombathely, FALCO Zrt. is to establish a sustainable site and thus secure the future of the company. For the company this means not only state-of-the-art production units, but also compliance with the highest environmental standards.

Between 2007 and 2019, Kronospan has invested HUF 49 billion in FALCO Zrt., an average annual investment of HUF 4 billion.

In 2020 FALCO Zrt. undertook plans to make a total investment of HUF 8 billion by the end of 2024 over a 5-year period. The key investments include:
FALCO Zrt. received a grant from the non-refundable, post-financed fund of the EKD (awarded by Individual Government Decision) managed by HIPA International Investment Promotion Agency Non-profit Zrt.
The amount of the awarded grant is 15% of the value of the eligible investments, a payment of HUF 1,24 billion.
The announcement of a favorable grant for the company was made by Péter Szijjártó, Minister of Foreign Affairs and Trade, at a protocol event held at the Ministry of Foreign Affairs on 1 February 2021. 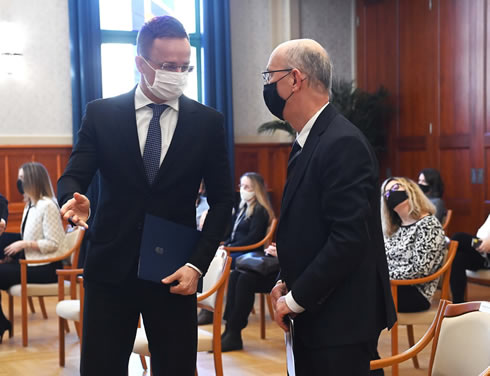 Due to our new recycled wood cleaning technology, FALCO Zrt. can further increase the proportion of recycled wood used for particleboard production. This activity contributes to reducing Hungary’s carbon footprint.

In the coming years, the company is planning to expand its recycled wood collection and pre-processing capacities beyond the commitments defined in the grant package.

FALCO Zrt. wishes to remain a key player in Hungary's wood-based panel and furniture industry and its recycled wood management. FALCO Zrt. has been a leader in wood recycling for many years, and is committed to the circular economy in the wood-based panel industry. This is due to the fact that a significant amount of Hungary’s recycled wood is used in the production process of FALCO Zrt. Overall, FALCO Zrt. makes a significant contribution to Hungary meeting the goals of the European Union.